An eight-story structure of stone and steel in a setting of freeways, OSU Medical Center crowns the crest of a hill overlooking the Arkansas River in the heart of downtown Tulsa. The hospital had a modest beginning from a single structure to today’s imposing complex of buildings, continuing to meet the needs of the underserved population in the Tulsa metro and surrounding areas.

The need for an osteopathic hospital in Tulsa came to fruition in 1924 by Dr. C. D. Heasley.  Dr. Heasley launched Tulsa’s first osteopathic hospital at 14th and South Peoria Avenue, calling it the Tulsa Clinic Hospital; it had 16 beds. Three years later, Dr. Heasley leased an apartment building at 1321 S. Peoria Avenue and converted it to a 25-bed hospital. It was later sold and changed to Burns Memorial Hospital.

Years passed and osteopathy flourished in Tulsa.  Young doctors moved to the city and youth began to show an interest in the profession. It became more and more evident that the existing facilities in Tulsa could no longer accommodate the needs of Tulsa’s enlarging group of doctors.

It was then that Dr. Fred S. Clinton approached Dr. John W. Orman with the suggestion that the osteopathic profession should buy the hospital building at Ninth Street and Jackson Avenue.  Dr. Clinton had been largely responsible for that hospital. It was constructed during World War I in the first six months of 1916.  It was a 50-bed institution with special quarters for its supervisor and nurses, and it was the city’s first fire-proof and entirely modern hospital. 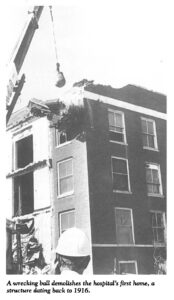 In 1925, the building had been sold to the Delaware Baptist Convention and sold again later in 1933 during the depths of the depression.  For several years prior to the mortgage foreclosure in 1942, it had become known as Tulsa General Hospital and West Side Hospital.

A young osteopathic physician, Dr. Robert D. McCullough, had a vision during the middle of World War II that he and several of his colleagues could operate an osteopathic hospital in downtown Tulsa. On November 1, 1943, he carried a $35,000 bid on the old Oklahoma Hospital Building to the steps of the Tulsa County Court House.  The bid covered the requirement of the creditors of the foreclosure of the mortgage.  It was the only bid offered for the property which once had been appraised for $350,000.  Dr. McCullough represented the Osteopathic Hospital Founders Association, a group of physicians that had banded together, elected officers and formed a non-profit corporation for the purpose of obtaining a building to operate as a hospital for the city’s growing number of osteopathic physicians.  In the fall of 1943, they conducted a campaign and raised $85,000 and they borrowed the balance needed to buy and remodel the hospital building.

Oklahoma Osteopathic Hospital opened its doors on December 17, 1944 with excitement of visitors at its open house. Hundreds of friends of osteopathy toured the completely refurbished building with its 60 beds and 14 bassinets. Guests were impressed by the attractive accommodations for patients and the modern operating rooms. At that time care in a private room with bath was $7 a day and major procedures were $15. The hospital stayed busy right from the start with 215 babies born in the first five months of operation. 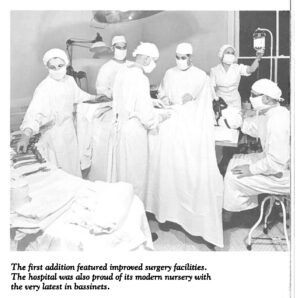 The first lay members joined the Board of Trustees three years later.  In 1951, the American Osteopathic Association grants approval for OOH to train residents.  It began remodeling and new construction in 1954 and finished two years later and was the first Tulsa hospital with air-conditioning. They continued with a $1.25 million expansion and in 1959 OOH became the third largest osteopathic hospital in the nation with the dedication of new wing. It was also the site of Tulsa’s first pacemaker implantation in 1961.

Bed taxes were lifted in 1962 after 17 years of growth, reaching a patient capacity of 300 beds in 1966. Oklahoma legislature created the Oklahoma College of Osteopathic Medicine and Surgery in 1972. The first medical class entered two years later. Dr. Harley Galusha performed our state’s first intraocular lens implant in 1974. The lens implant operation, which he perfected after intensive training with specialists in California and Europe, revolutionized cataract surgery. And in that same year, we opened the Oklahoma College of Osteopathic Medicine and Surgery. Several new services were added in the following years. After the completion of the West Tower in 1975, resulting in a total of 443 beds, cardiovascular services started a year later, followed by new kidney dialysis unit and CT scanning in Radiology in 1977.

The 1980s saw significant changes in the facility construction. The original hospital building was torn down in 1981 and the addition of the five-story Physician Office Building was added north of the hospital.  A year later, the East Wing opened as the largest expansion in the hospital’s history. By the end of the decade, after studies were conducted, the name was changed to Tulsa Regional Medical Center.  Brookhaven moved their adult mental health unit to the hospital with a 20-bed adolescent unit and launched major behavioral health programs. It was also during this decade portions of Francis Ford Coppola’s movie “The Outsiders” were filmed at our hospital which included stars such as Matt Dillon, Rob Lowe, Ralph Macchio, C. Thomas Howell and Diane Lane.

The hospital began welcoming patients to its new, state-of-the-art labor and delivery unit in September 2015.  The unit offers pregnant women and their families’ one of Tulsa’s most comfortable, family-friendly environments when it comes to delivering a newborn.  The unit boasts 13 spacious, private patient rooms that accommodate a woman during labor, delivery, recovery and postpartum.

Today, OSU Medical Center is still a major downtown healthcare destination located at 7th and Houston. Our facility is home to Oklahoma’s top ranked Wound Care and Hyperbaric Clinic.  Saint Francis Health System, a locally owned and operated health system in the Tulsa area, took over management on October 1, 2016.  Our physicians, technicians and nursing professionals are dedicated to providing exceptional health care to every patient, every time.

We offer same-day appointments at several of our clinics. With OSU Medicine we offer many clinic locations serving the Tulsa metro and many surrounding areas.  OSU Medical Center works closely with the OSU Center for Health Sciences and the OSU Physicians Clinics to create the nation’s largest osteopathic teaching with 11 residency programs and 9 fellowship programs.

With combined efforts, OSU Medical Center, OSU-CHS and Saint Francis Health System will work to improve patient care, expand accessibility, expand market share and provide the revenues needed to maintain our commitment to teaching, research and the provision of health care right to the heart of Tulsa. 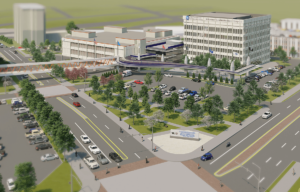 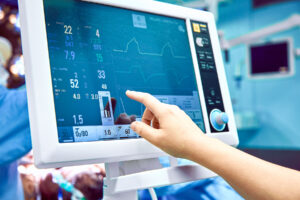 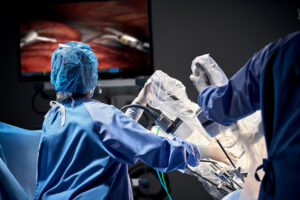 OSU Medical Center is pleased to announce the recent acquisition... 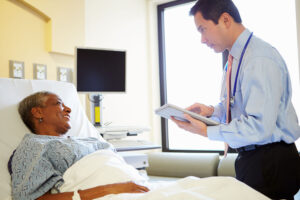 You better get in line now, a brand new COVID...

Physician Finder: 918 599-4OSU
If you are experiencing an emergency call 911 or visit our EMERGENCY DEPARTMENT.